Well here I am back in the studio for a bit. And I wanted to share some seamless with you. I mean shooting with seamless backgrounds. 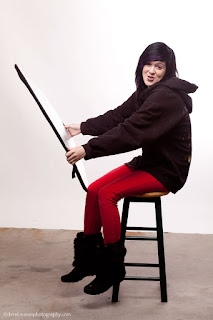 A little bit of fun before some serious work. We were setting up the next days early morning shoot. I always like to spend the time to prepare so my clients aren't waiting around while I set-up. When I do, I tend to grab a family member to model for me so I have a live set.

This time it was my daughter. I told her to have some fun with it (as you can see she did, she loves making faces) and I'll direct as we go.

In this blog you'll see some of the layout as I'm working it in and some of the final results after tweaking the positions. You'll even see a quick one with her holding the reflector to see if that's what I want.

These set ups usually only take about 15 minutes, after the gear is assembled, but I used this to try out a new lens I just picked up. The Canon 85mm f/1.8. Great detail but you have to watch the light flare from the background (I haven't received the lens hood yet, that's another story). It always adds headache in post production, which by the way is why I switched to Canon. I was just tired of spending so much time in post with the old Pentax gear. Great results, too much work.

The 5D mkII, and the new glass, cut that to 10 percent. Now I can spend more time on composition and get it done without all nighters.

Everything shot with Canon 5D mk II, Canon 85 mm f/1.8 (awesome lens) or Canon 70-200 f2.8 and Opus strobes, 36 x 48 softbox and one bare bulb with reflector for the back ground blow out. with Pocket Wizard III's. The third light source is actually a big reflector to get that fill light from the bottom.

These are all shot on white. What I like about using white is light control allows for white to black backgrounds and everything in between (almost).

Sometimes simple is better and in these cases that's absolutely true.

I'll post a few samples of the next days shoot once we're finished with the project.