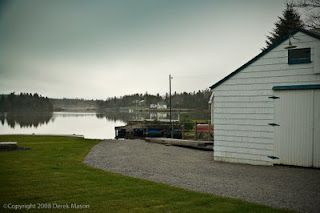 Hi everyone, or at least the few who drop by.
I know we're now in the dead of winter and spring and boating season seems like light years away. Well maybe 6 weeks away. But still I'd like to share these images with you. They were taken in mid November here in Prospect. It's the day we took our dock out for the season and my first attempt with Lightroom 2.
Click the [link] to see the gallery of these images.
Hope you enjoy, Derek
Posted by Unknown at 11:04 AM No comments: 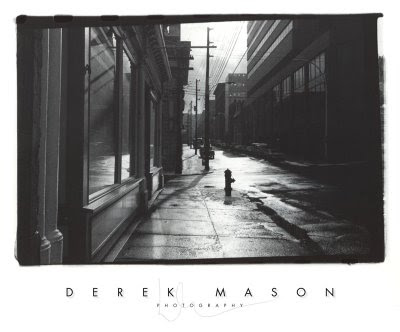 Well guess what. I finally added a post to this blog about one of my passions, photography.
What I'd like to talk about is my experience and transition into digital cameras.

In early 2005, I decided it was time to put my film camera away and buy a decent DSLR. Now I may get some flak on this but I don't care. I do all my shooting with Pentax cameras for two reasons.
One, I learned on a Pentax SP1000 in college, (NSCAD) (last thread mount if I'm not mistaken). It was great. It was completely manual, no bells at all and it gave me great pleasure since all I wanted to shoot was b/w and make my negatives sing in the darkroom. As a matter of fact, the first camera I bought (actually it was a gift) was the famous K1000 which I still have today.
Two, they cost a lot less than many of the "professional" grade cameras, as some would say (that's a topic for another day), with millions of production lens available and usable on all Pentax DSLRs.

Now you have to remember I wasn't a professional photographer, not that I consider myself one today, I just loved to shoot like so many others. I actually shot a few weddings to get extra money while in college as well.

But when I started Just That I realized I could do more than just shoot and give my prints to people as their wedding gifts.

So off I go looking for the great DSLR. I bought an ist Ds. It worked with the lenses I had and I could pick up practically anthing used and it would work. Sounded good to me.

Since then I have added two more digital bodies (K10 and a K20) and started to update my lens and lighting to suite my new adventure in photography. It has all worked well for me but I must say it has been an up hill climb.

My problem hasn't been with the cameras, they do everything I ask of them, iregardless of what some others say are "cameras for the professionals". lt's been the software.

To let you in on a bit of my past. I have worked in the prepress industry for over 25 years and I was one of the very first in my market to embrace the apple computer and desktop publishing, as it was called back then. I used a Macintosh SE30 in my design work with Photoshop 1, Illustrator 88 and Quark Express 2.

I have worked on large horizontal copy cameras producing continuos tone separations for the printing industry. I'm talking 20 feet long. And have reproduced some very fine lithos of some great art. As well as the large Hell drum scanners ( analogue computing ).

As I moved forward with the new technology I became the general manager of one of only two service bureaus east of Montreal. Mind you that changed very quickly as the technology became more readily available.

Anyway, I'm starting to move away from my topic. You get the idea, I've been involved with this stuff for quite some time.

But, when I decided to start using my first camera and shoot in RAW, that's when it all got tough. No one really explained the simple fact that if I use anything other than the processing software that came with the camera I wasn't getting the settings I set the camera to. So here I was, shooting jpeg and adjusting and it did what I wanted. I thought that moving to RAW just meant that the settings just weren't permenant and I could change it all later. What's funny is when I started shooting RAW I was using PhotoshopCS and the RAW version was pretty close to what I expected, or thought that's what I should have expected.

So as I moved on, to shooting to suppliment my design work, I thought I needed special software to handle all these big RAW files I was shooting. I would go out and shoot, come back in, upload the photos to my laptop, check them out quickly in the browser software supplied with the camera. All seemed fine so I'd burn everything to disk (to be safe) and move on.

When I got back to the office I would then import them into what was my processor/organizer of choice at the time and start to work on them. Everytime I would do this I'd find I wasn't seeing what I thought I'd seen after the shoot. I would end up comparing the original browser software image with the organizer software then finally bring it into Photoshop and get completely confused. They all looked different.

Turns out not all venders write their software within a standard set, at least not in 2006. Recently I have re-evaluated my needs, since I just upgraded my computer equipment and have gone back to all the adobe products I have grown accustomed to. I have been using the CS suite for some time, I use CS3 at the moment and have added LightRoom 2. When I purchased the previous organization software there really wasn't anything else to choose from at a reasonable price and although I'm not going to name the software, because really it's not their fault, it's mine for not digging deep enough at the beginning. I figured hey it had to be right and I must be wrong.

My mistake was looking at the cameras and software and thinking, hey, I shouldn't have to do much of anything and this gear will give me exactly what I want. What I putz I turned into.
In the past I always took my negs, or slides, as an intermediate step and finished my piece in the darkroom, or scanned the neg/slide into my computer and finished it there. Even when I was reproducing other peoples images I added a part of me into everyone of them.
These days I fly through my images and produce what I feel they should look like not what they were shot like, or what the camera shot.

I suppose what I'm trying to get to with all this is, if you think you have the wrong camera and think you need to buy the latest and greatest marketed gear to get great pictures, stop and think. The camera you use should simply produce a usable image you want to start with, at the highest resolution you can afford. I hear, and read, this all the time, professionals spend as little as possible for their equipment because they just want to shoot and get the best return for their buck. But their idea of inexpensive is pretty steep for me, price a Nikon DX or Canon 5D mark II recently. Not that there's anything wrong with those but hey, you got to practice what you preach right?

Well one other thing you need to get is software you're comfortable with and what produces what you want or what you can sell.

Photography is still about what you want to finish with not what you think the equipment should be giving you. Creating great images is what matters.

Here are two images I would like to share with you. One is a b/w I shot in college, at the beginning of this blog. It's a shot looking south down Granville Street in Halifax in 1979 after a good rain. The second is one from Ottawa in 2007. Click on this [link] to view the Ottawa shots. I shot the first one in the gallery, put it in my software of choice and thought it wasn't worth using. I've since re-evaluated the shot and realized the shot was fine, the tools weren't letting me do what I wanted to do.

Hope you enjoy and talk to you soon.
Derek

Posted by Unknown at 6:46 PM No comments: