Good Thursday from Prospect. If you've had the chance to browse my new ibook you may have noticed a section entitled "There & Back on the Holiday Island" from 2011.


Well, those are from a trip on the Holiday Island ferry from Caribou (near Pictou), Nova Scotia to Wood Islands, Prince Edward Island. I was on an assignment for Northumberland Ferries Ltd (NFL) shooting from the Ferry for some promotional material I was also designing.

I met, the then marketing and sales coordinator for NFL, April Ennis,  on the ferry, April, has lived on the Island most of her life, and brought me in on the project. She also came to make sure the upper deck was clear for our shoot.

The trip started at about 9:30 am, on the Holiday Island, with the second crossing of the day. The first was at 6:30 am, no light for my purposes, on an overcast and cloudy day in Pictou. Since the shoot was only on the Ferry to Wood Islands and back I didn't need to load the car and left it on the Nova Scotia side parking lot.

The day looked like it was going to be a bust with the weather chilly, overcast and looking like rain. Hard to get great shots from the open deck of the Ferry in that. Although this was the fourth of June it felt like March, brrr.

But, since I was there, it's a 2 and a half hour trek from my house to the ferry, I thought I'd set up the gear to shoot. Maybe push it in Lightroom and Photoshop when I got back. One of the major shots I was after was a panorama of one side of the deck looking over the water so the tripod and pan head had to be set up. I had both bodies with me along with my 10-17 fish-eye, 12-24 ultra wide, 18-50 f2.8 (for the pan) and my 70-200 f2.8. Just incase we saw any wild life on the water. Minke whales are common in the straight. I ended up using it for some shore shots.

As we left the Nova Scotia coast the clouds started to part and the rest of the trip couldn't have been better if I asked for it. Sunny with just about the right amount of cloud and early day light. Even the water co-operated and remained almost picture still. Just enough movement to make it interesting.

I spent the entire trip shooting from the upper deck. Northumberland Ferries runs two boats through the in-season. The Holiday Island with the wide open upper deck, and the Confederation, which has more closed in deck and more inside accommodations and space for more cars. Only one of these runs at a time in the off-season, to allow for maintenance along with the fact that since the Confederation bridge between New Brunswick and PEI was built there was really no need for both of them year round. 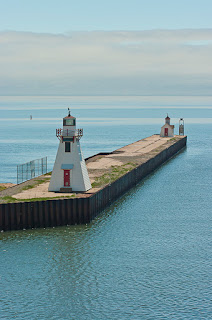 To give a brief history, until the bridge was built, the only way on and off the Island was by ferry. As a young lad the ferry was part of the big adventure to our family summer vacations in PEI. You see PEI is a great summer spot with almost endless miles of beaches, golf courses and camp grounds and motels.

The larger of the two crossings, ferry and passenger wise, was in the same location as the bridge is today (near Cape Tormentine NB to Bordon-Carleton PEI) and was retired once the bridge was complete.

It looked like the end of the ferry for good. Fortunately someone had the foresight to keep the ferry running at this crossing anyway.
That trip is one you must take. Lasting 75 mins it adds just enough time for you to take that vacation breath (you know, the one thats says, work's behind me and I'll worry about it when I get back breath) to get out of the car and relax with the family or partner.

I know, this is starting to sound like a travel blog, which it is not, but I had to share the story. Oh, and I believe they are playing live music on board the Confederation during the on-season. Check the site to confirm. 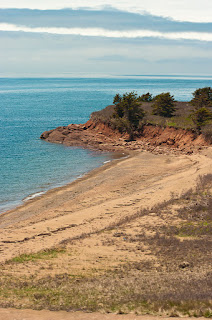 Long story short, the shot went off without a which, got what I wanted, enjoyed the trip and made me realize not everything should be in a hurry as most things seem to be lately.

Here's a link to the ferries site so you can explore and book your trip to tranquillity. http://www.nfl-bay.com/

Oh, BTW, when I got back to Nova Scotia the clouds were still there and still chilly. Funny, and me with a slight sun burn from the unexpected warmth on the trip. Hmm, maybe it was a message. I thought my wife would never believe the story…but I had pictures, ha.