Re-establishing the basics and moving

Today I'm going to throw a hint at my recent projects. I'm also going to show a little how to.

I've recently been following a photographer by the name of Zack Arias out of Atlanta Georgia. Great photographer.
I probably follow him, not so much for his work, although I'm a fan, but because of his attitude to the business and his open attitude to share. He's been sharing his "One Light" philosophy with all of us. Thanks Zack!

Many photographers know this is a tough business to make a living. You gotta love it or forget it.
Personally I'm somewhat fortunate in that I have a background in the printing business and studied design and photography in college.

I am able to put two hats on to feed myself but as the gear I use to create images matures I find myself forging ahead with shooting more and more.

With the gear becoming mature, meaning you can rely on it, I can start forgetting about the gear and mega pixels and concentrate on what matters, getting the picture.

Now it's back to basics for me. I went off on a tangent and forgot about getting the usable shot right away. Kinda blaming some of it on inferior gear I was using, but not all of it. I'm re-establishing composition and light in my head. Instead of cursing because the camera didn't fire because it was too slow to focus. Now I just set up and shoot, sort of. Well close enough in comparison to the hoops I had to jump through.

It's been said over and over, It's not the gear that makes the shot. Well to an extent thats true. It's just how much work you need to do after the shot to get it up to snuff. Instead of saying, "I'll just fix it in photoshop" why not just shoot it right.

Well some cameras aren't up to that task (learned that the hard way). Between not being able to see the full frame you are composing to the camera over riding your set-up to awful noise at low light and failure to fire due to slow focus, it was becoming a burden to shoot and my confidence was failing. I mean could I honestly rely on myself to get the frame I was after. You don't get second chances when the moment is gone.

Anyway I started writing this blog and went off on a rant I don't need to get into so I'm deleting that part and carrying on with something positive, my new work.

The reason I started this blog was two fold. I wanted to share a "One Light" set-up on seamless with you and let you know I will be moving to my new site, Blog and all, to derekmasonphotography.com. It will be all fresh and new in about a week. Gotta finalize a few new images going up.

I won't abandon this one since I like the connection through Google, but I will be showing off my focused, professional work through the new one It will be more of an add on showcase while this one will be as it has been. Life in Nova Scotia, my own editorials so to speak.

Comments on both will be much appreciated to help me see what people like most. Don't worry, I'll add a link back to here from there.

For this post, here's an example of what one light, and a couple of reflectors, can do for an image.

This was on site for some corporate portraiture I did on the weekend. (In the board room with a 9 foot ceiling)

My set-up was one strobe set on a boom with a 48 in soft-box above the subject blowing slightly past so to throw some light on the white seamless, one 36" round reflector to lower stage right, for chin fill, and one 42 x 72 inch reflector to back stage left for soft back light. I also turn that big reflector around to shield a second strobe when going full white on the seamless, it doubles as a v flat or cutter to keep the second light out of the cameras frame and kill light flare (though that would be a "two light" shot wouldn't it?).

Once the shots are finalized and delivered I'll share some of those results. In the meantime, this is my wife who I dragged along as assistant. My daughter has taken up the challenge of assisting but had a minor medical procedure that stopped her from coming along. You may have seen her in my "Doin' it Seamless" blog a while back.

Posted by Unknown at 9:52 AM No comments: 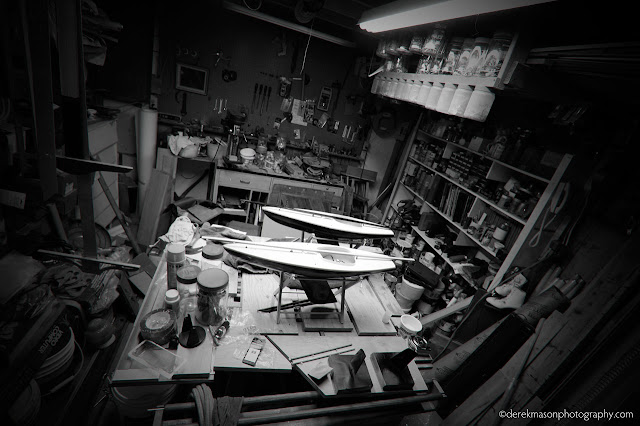 I want to share a little imagery I call beauty out of Mayhem. It's a study in space used up as soon as we get in it.
As a project comes to a close, so does the usable space of my shop.

I find as I build these beautiful little boats (ready to race) my space tends to get more and more crowded as they come to completion. Sort of how I use up every inch around me.

Wonder if it's possessiveness or just working in cramped quarters. 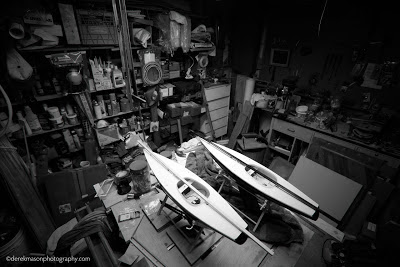 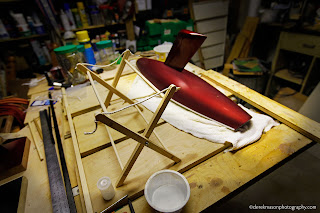 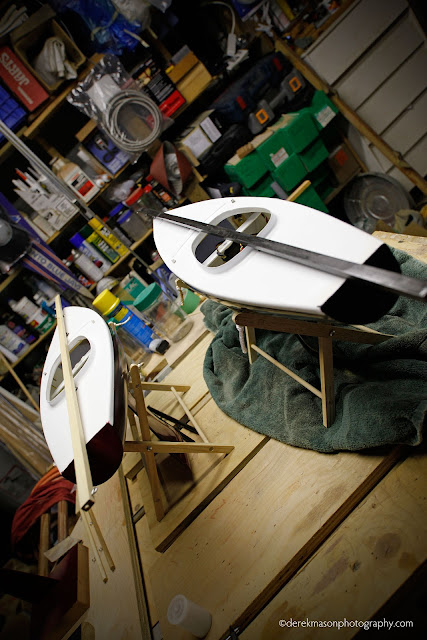 Oh well…Do the chore, clean up, do the choir, clean up, so on and so on.

I hope you enjoy these.
(PS, I'd rather shoot these than dead trees in the fall)

Derek
Posted by Unknown at 7:49 PM No comments: